Initially based in Newtownstewart, Co Tyrone, General Trading Services (GTS) was founded in 1939 by the late John Davis and originally started life as an agricultural merchant's business. In the early days, local hauliers were used to transport the goods, but as the business developed GTS purchased trucks of its own.

However, due to the seasonal nature of the agricultural trade, the trucks were often under used and rather than see them standing idle, John made the decision to use them to transport goods for other local companies – so a transport 'arm' was added to the business.

By 1985 increased demands for haulage became the catalyst for GTS to focus on transport as its core activity. Today, GTS specialises in road transport, materials handling, storage and warehousing.

Operating an extensive fleet of vehicles and over 200 trailers the company is very well placed to provide the consistently high levels of service demanded by its customers. This has been achieved by forging a close working relationship with its UK partners, creating a strong depot network servicing all of Great Britain and Ireland on a daily basis. 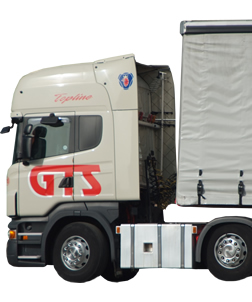